Andromona the Monarch caterpillar crawled along the branch away from the leaf that had been her lunch. She was very full up and heavy now because since she first hatched from her egg, she was 100 times bigger. As she crawled along the twig, above her mother, a beautiful Monarch butterfly called down to her.
“Come on Andromona, I told you yesterday, it's high time you became a chrysalis.”
“I know Andromummy, but I'm really enjoying the milk weed here in Andromeda Botanic
​Gardens and I think it's going to be pretty boring being a chrysalis.”
“Boring or not young lady, that's what has to happen and besides which once you have your
​wings think how much more of Andromeda Botanic Gardens, you'll be able to see!”
“I suppose so” Andromona said.
“Come on then, I’m waiting!” Andromummy said.
With a big sigh, Andromona found a quiet spot and began to shuffle her green and black stripy
body into a chrysalis. The last thing she heard was Andromummy saying, “good girl.
​We’ll see you soon.”
BUTTERFLIES AND
​ANDROMONA'S ADVENTURES!​​

2. Monkey Business!
3. A Close Shave
4. The Hurricane
Andromeda has Emerged!
1. Andromona the Caterpillar Becomes a Chrysalis

Andromona's Adventures
​Wonderful stories for adults and children! We follow the adventures of Andromona, a monarch butterfly. Her sense of wonder, bewilderment and mischief will delight and enthral!
Authur: Amanda Thomas
​Illustrator: Sheri Nicholls​ 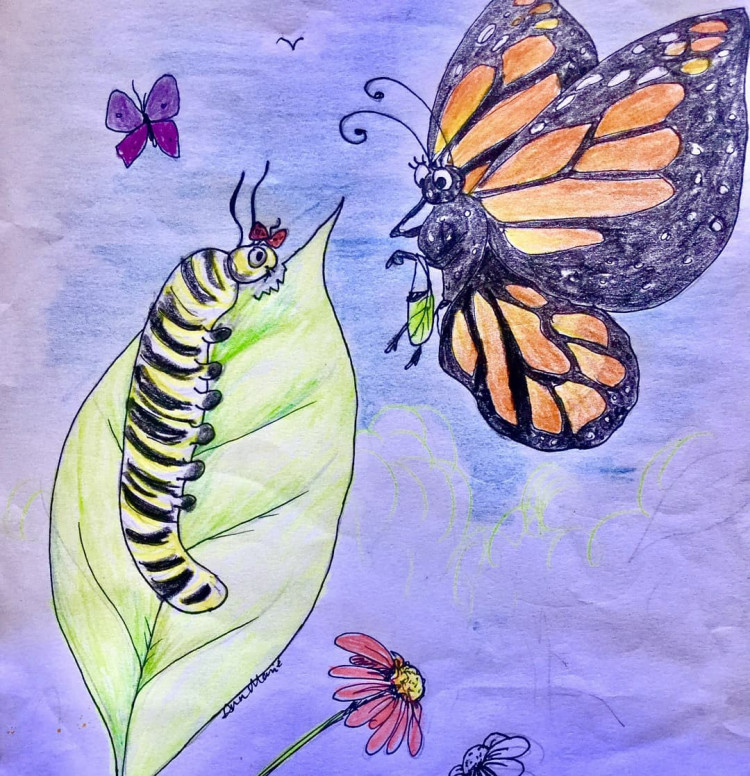 Inside her chrysalis Andromona tried hard to see what was going on outside. She knew that her body was undergoing big changes and, in some ways, she was very excited to be able to see more of Andromeda Botanic Gardens, once she had her wings. She felt quite drowsy now and she began to dream of soaring up above the trees and looking down on the gardens that were going to be her home. There would be so many flowers to visit and so many other animals to see. Andromummy had already warned her about some of them and in fact when she emerged from her chrysalis she was going to find out just how dangerous one of these animals could be - but that is a story for another day. 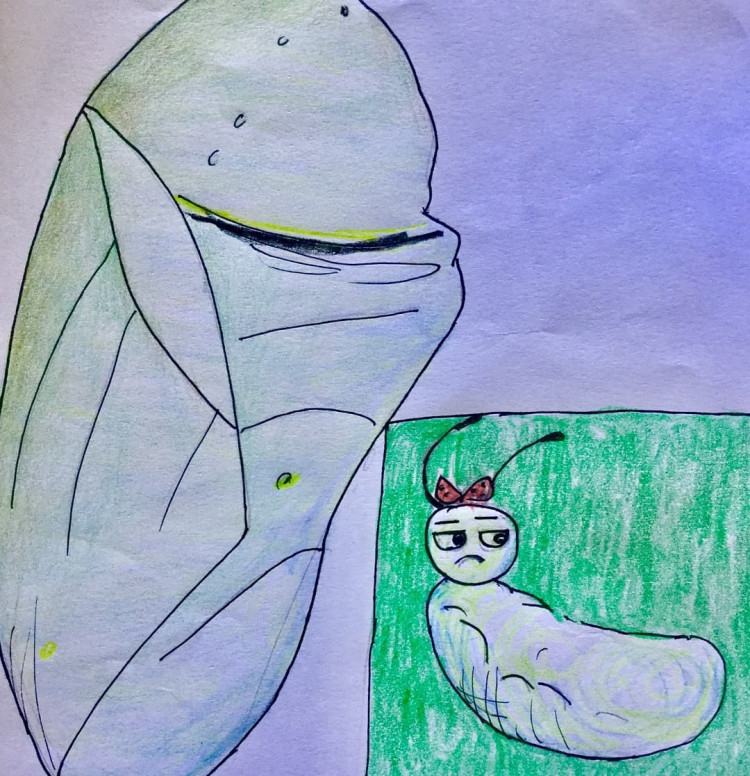 Andromona stirred in her chrysalis. She had woken from a deep sleep and she knew this was the time that she had been waiting for. Little by little she moved and pushed and then finally she was free and stood up on the twig that her chrysalis had been attached to. Andromona looked down. Her little stumpy caterpillar legs were now long and graceful and as she unfurled her wings, they shone in the morning sun. The colours were beautiful. 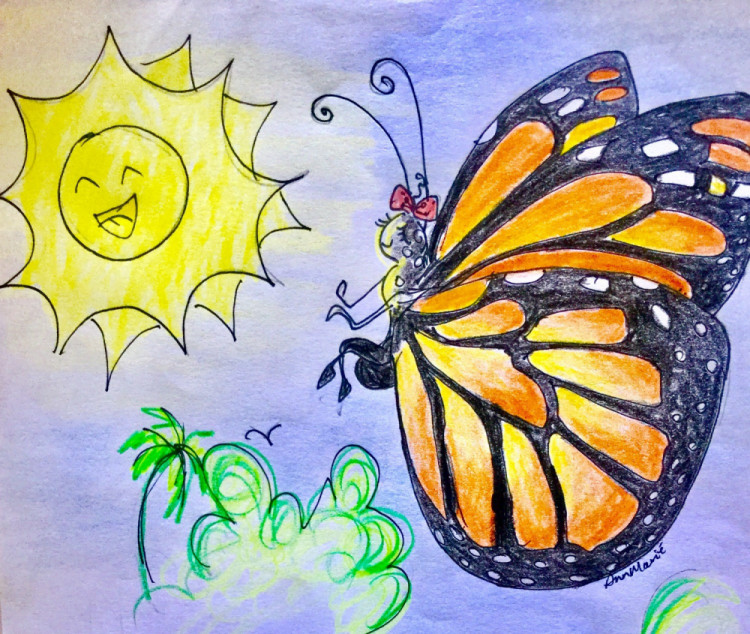 Andromona was just about to take her first flight when she heard a noise in the tree above her. She looked up and saw the outstretched paw of a green monkey. Just then, above her, a voice rang out.
“Andromona, FLY!” It was Andromummy.
And Andromona did fly! As the monkey’s long fingers brushed past her wings she took off and flew as fast as she could away from the tree. Out of the corner of her eye she could see Andromummy and she flew over and landed beside her on a leaf.
“Well done, Andromona. You are absolutely the most beautiful Monarch butterfly I have ever seen! Wasn’t it worth the wait?”
“I suppose so”, Andromummy said “but that was a close shave with the monkey. Are they always like that?”
Andromikey, Andromona’s brother piped up from further along the leaf.
“Yes they are! They will rip your wings off and suck your brains out if they catch you!”
“Now then Andromikey, that’s enough of that,” Andromummy said sternly.
“Well, it’s true!” Andromikey said, “come with me and I’ll show you around, Andromona. Andromeda Botanic Gardens is a pretty cool place!”
So Andromona went with her brother and soon had a new adventure - but that is a story for another day! 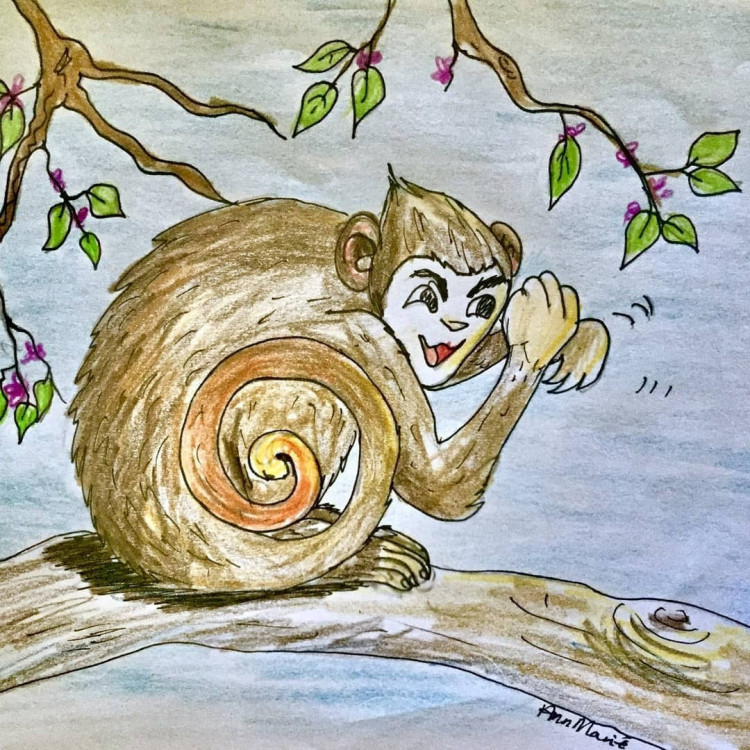 Andromona was visiting the milk weed in Andromeda Botanic Gardens. Andromikey was with her and as they settled down on the milk weed out of the corner of her eye, Andromona saw a creature stirring.
“Wow that looks like an interesting animal, I think I’ll go over and say hello!”
“Oh no you don’t that’s a lizard and if he catches you he’ll…”
“I know, suck my brains out and pull my wings off!” Andromona said.
“You got it sis!” 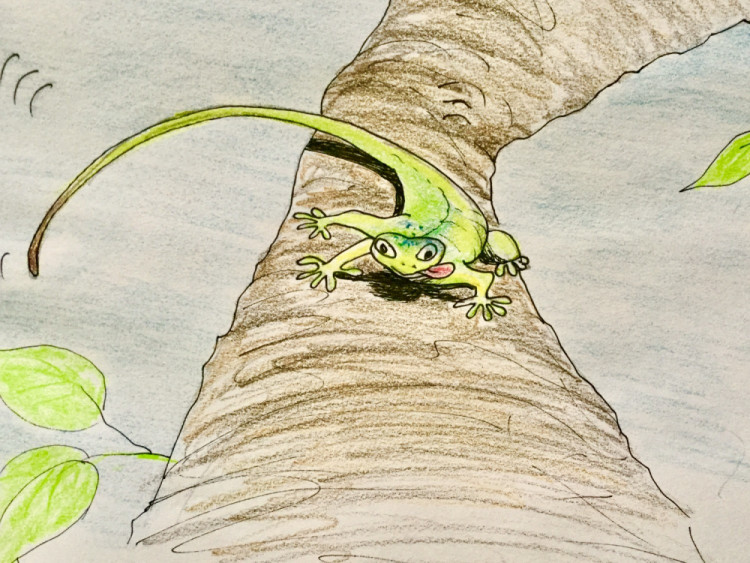 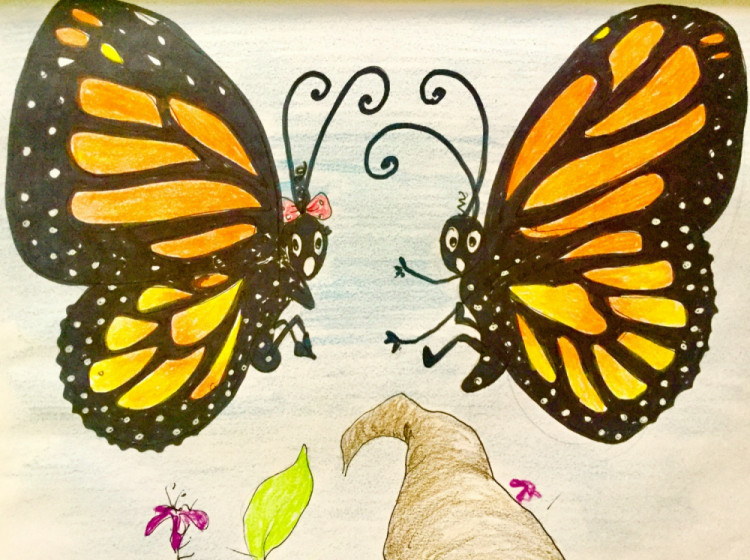 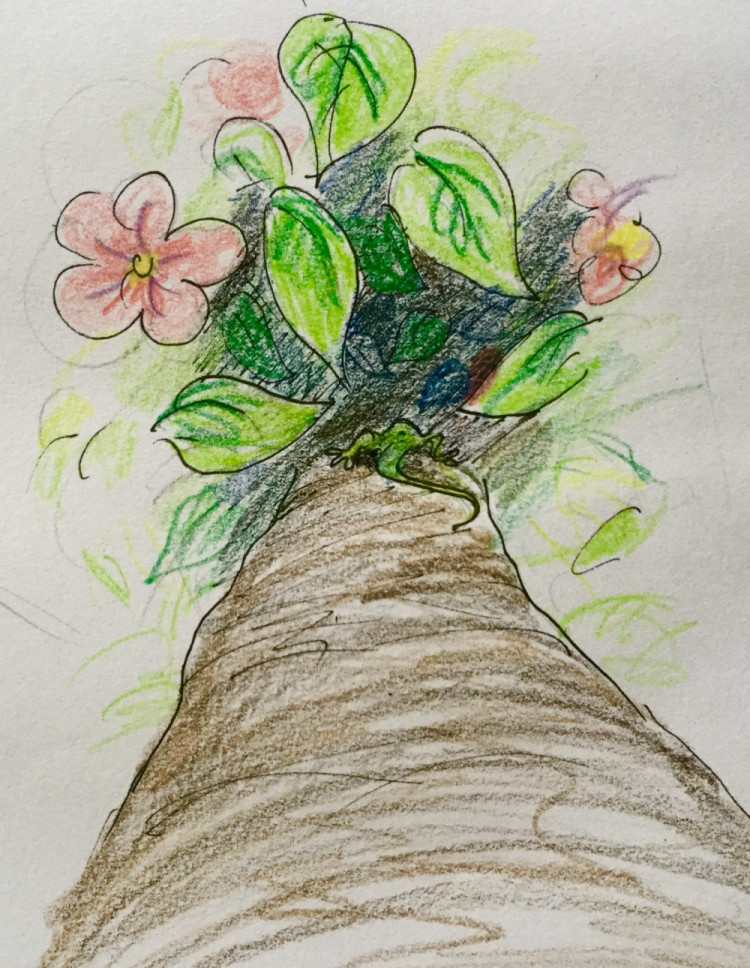 As the started to move away the lizard looked like it was going to go the opposite way. Then suddenly, before she could even flutter her wings to fly off the lizard had turned around and quick as a flash he had run to where Andromona was just taking off and jumping forward, the lizard grabbed her leg! Andromona shrieked and pulled hard. As she did that Andromikey flew at the lizard. As he swept down on the scaly creature it let go of Andromona and snapped wildly at Andromikey. But Andromona’s brother was too quick for him and he was up and away, shouting to Andromona to follow him.
As they landed on a branch above them, they saw the lizard slink off into the shrubbery of the Andromeda Botanic Gardens.
“Phew that was a close one!” Andromikey said
As he spoke Andromummy fluttered down to join them on the branch.
“Now then you two, what have you been up to, not getting up to mischief I hope?”
Andromona and Andromikey looked at each other and said.
“No Andromummy, not us!”
“Alright, listen to me both of you, I need to tell you something very important. Andromummy did have something very important to say – but that is a story for another day.
Andromona was flitting around the milk weed plants in Andromeda Botanic Gardens. There was something in the air that felt different. She was looking for Andromummy who had said that she had something important to say to them and Andromikey was beside her.
“Do you feel something strange in the air?” she asked her brother.
Oh yes! I think we are going to have a storm, maybe even a hurricane,” he said.
“What’s that?” Andromona said.
“Well it’s when the wind blows very hard, it can even knock down some of the trees!”
“Now then Andromikey, don’t frighten your sister,” Andromummy said. “I was just coming to tell you two that there is indeed a hurricane coming.”
“Will we be safe?” Andromona was frightened now.
“It is true that a hurricane can do a lot of damage but look what the other butterflies are doing.” Andromummy said.
Andromona looked and saw the other Monarch butterflies fluttering down into the leaves underneath the bushes. Then they wriggled and wriggled until they were covered.
Andromona followed her mummy and brother into the leaves and then like the other butterflies she began to wriggle until she was all covered by the leaves. Beside Andromona, Andromummy put her wing over her to comfort her and then - the wind began to blow!
The noise was louder than anything that Andromona had ever heard and she snuggled under Andromummy’s wind as the wind blew and they started to hear loud cracks and thumps as branches fell from the trees onto the ground.
Then suddenly there was a loud crack over their heads and Andromona felt the leaves above them move as something heavy dropped. Would it hit them?.......
That is a story for another day! 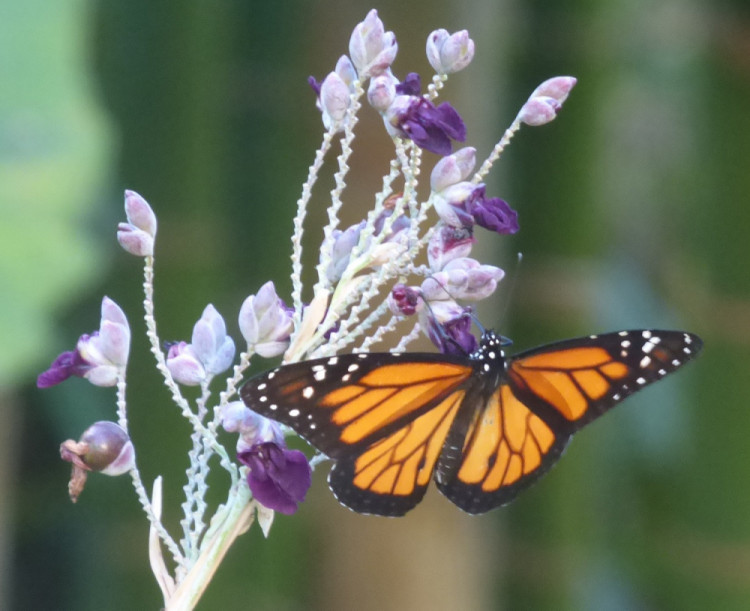 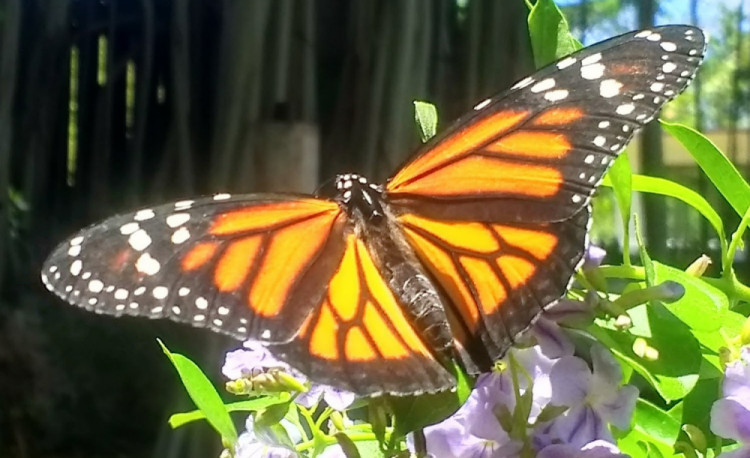 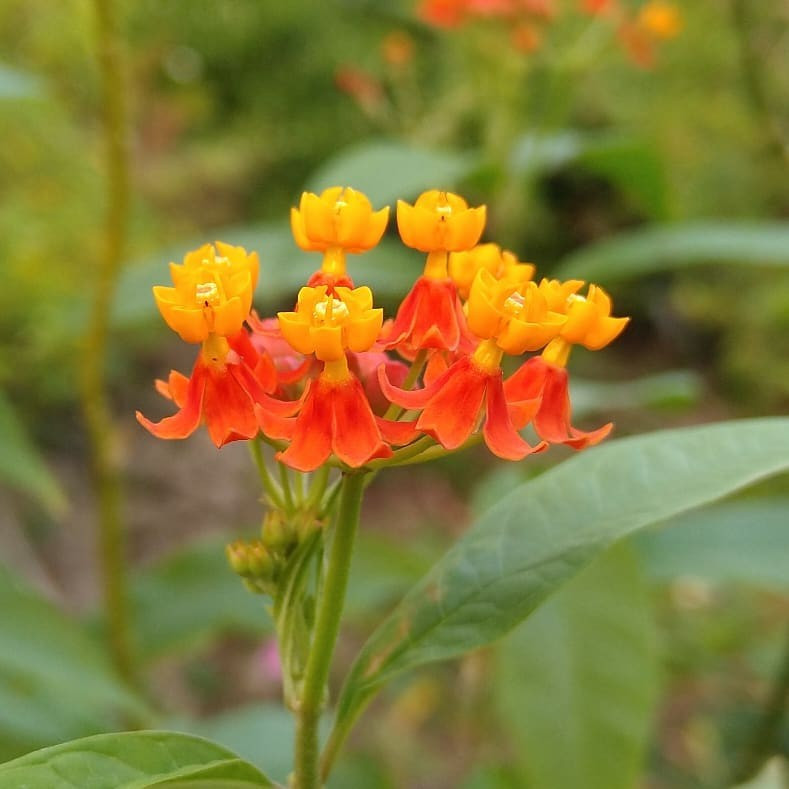 We have planted numerous milkweed plants in the Ethnobotanical Garden at Andromeda. In the same area we have sown celosia and zinnia seeds with their nectar-rich flowers. We hope the emerging monarch butterflies, as well as the buck-eye, gulf fritillary and the rare gold-rimmed swallowtail butterflies remain in this area so visitors can enjoy all these wonderful butterfly species, and others, found at this historic organic garden. The management team is committed to protection of our biodiversity. (All photos taken at Andromeda Botanic Gardens.) 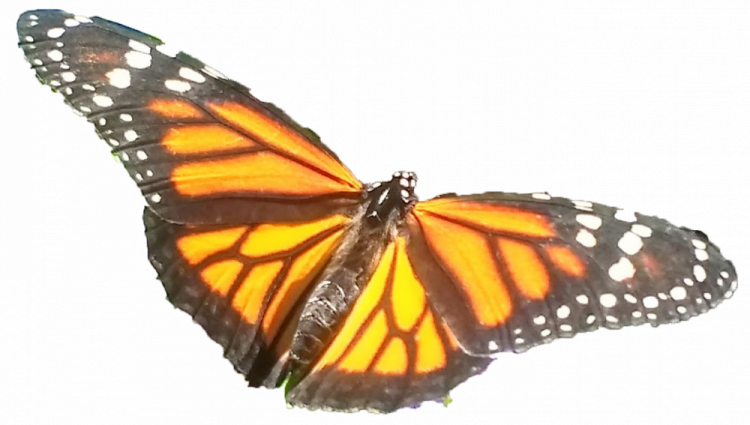 Butterflies
​We have planted numerous milkweed plants in the Ethnobotanical Garden at Andromeda. In the same area we have sown celosia and zinnia seeds with their nectar-rich flowers. We hope the emerging monarch butterflies (click here for a short video of monarch butterflies in the Bougainvillea Garden), as well as the buck-eye, gulf fritillary and the rare gold-rimmed swallowtail butterflies remain in this area so visitors can enjoy all these wonderful butterfly species, and others, found at this wonderful organic garden. 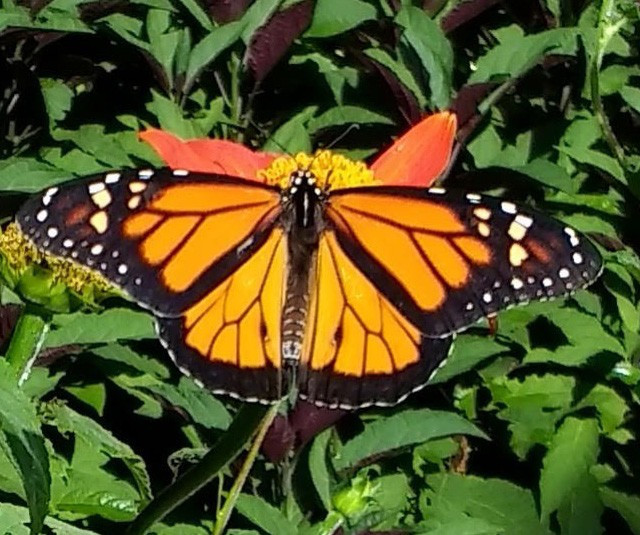 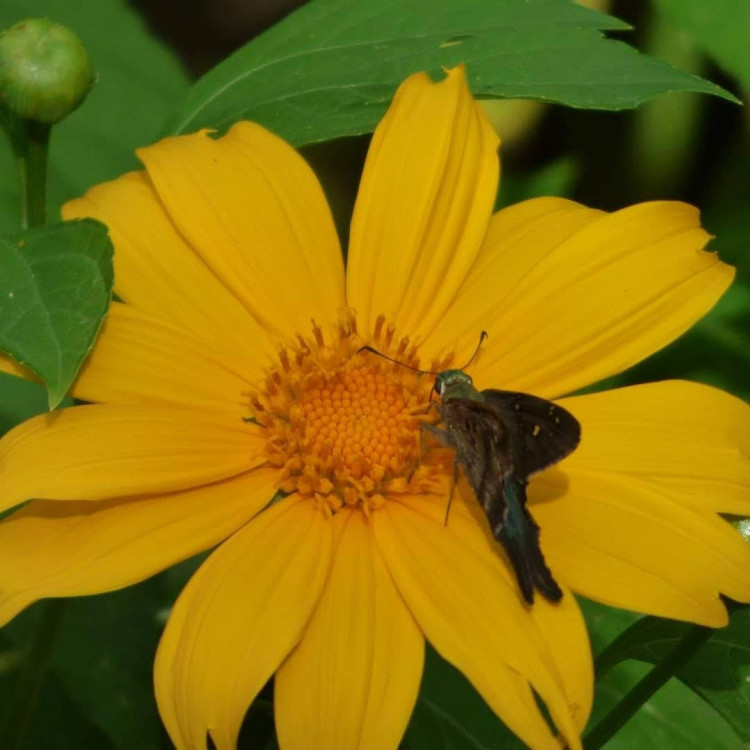 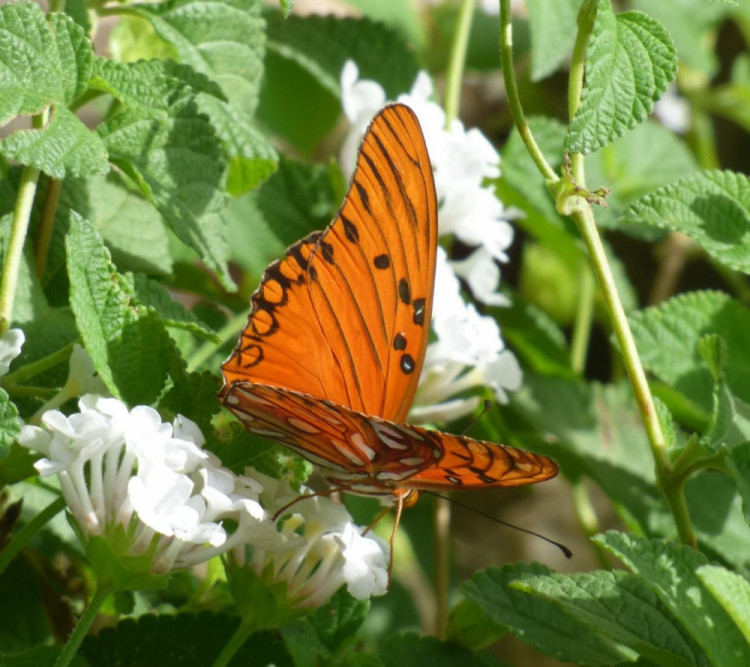 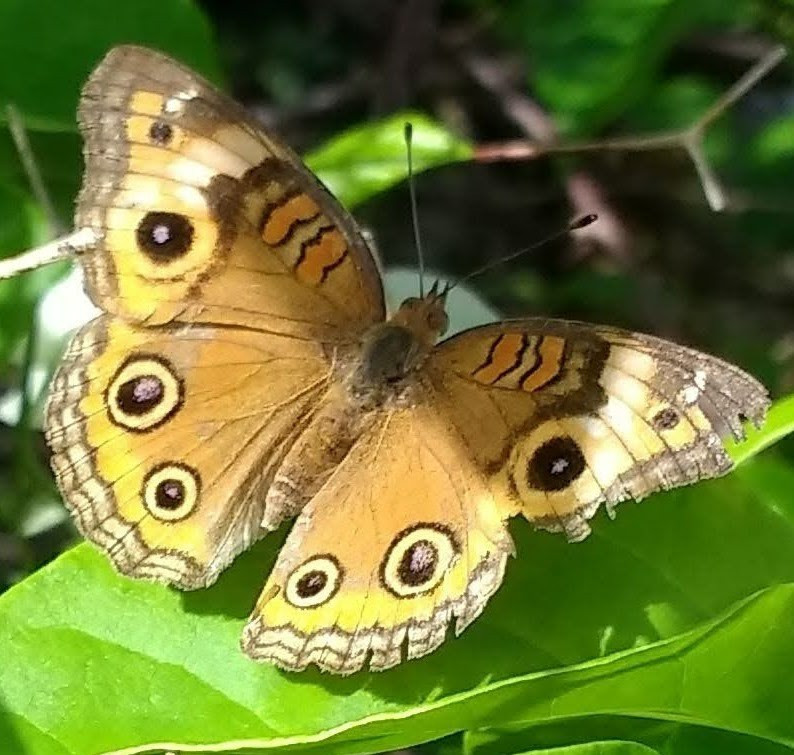 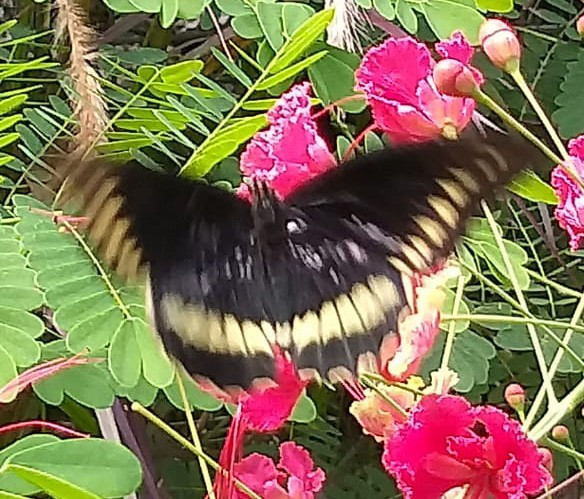 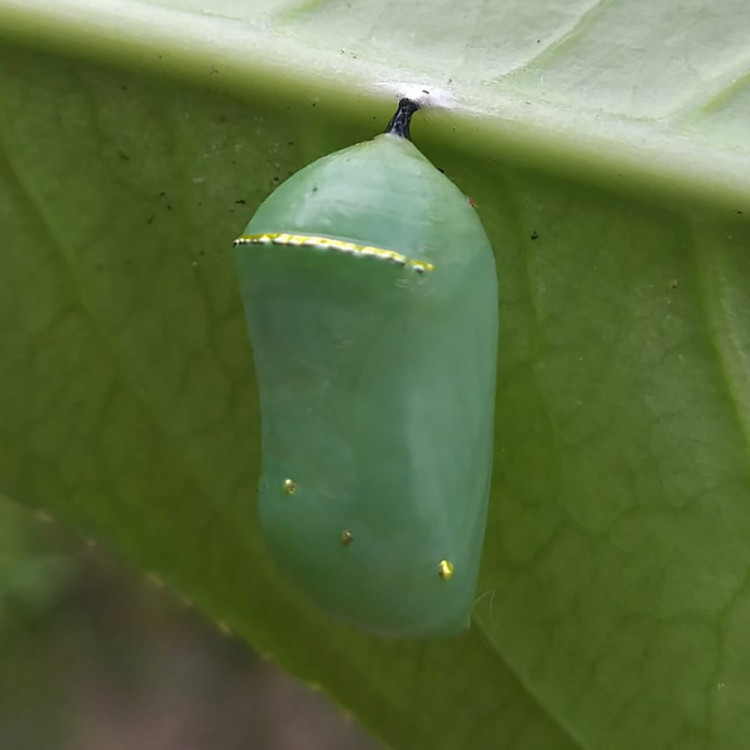 ​​"Andromeda is the best place to see butterflies in the West Indies."
"You can stand in one place and see 10 species of butterfly"
" You see butterflies here that I've never seen anywhere else in Barbados."

Andromeda is organic and committed to protecting our biodiversity. We actively plant nectar-rich species for our butterflies.
The best time of the year to see butterflies​ in between April and July, although you will see some throughout the year. 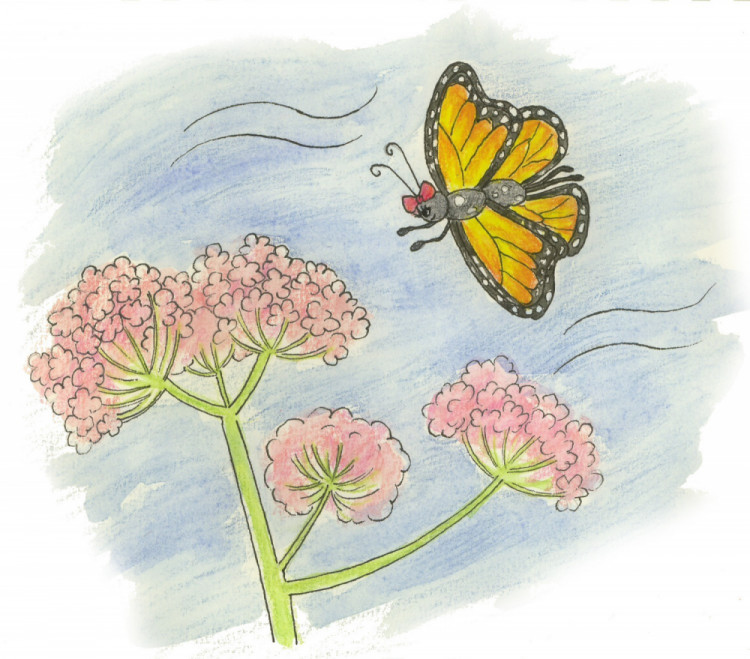 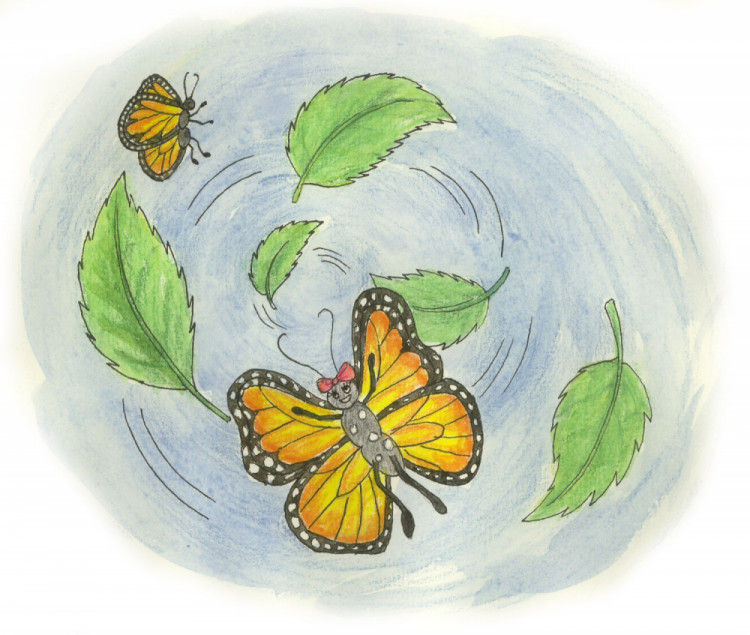 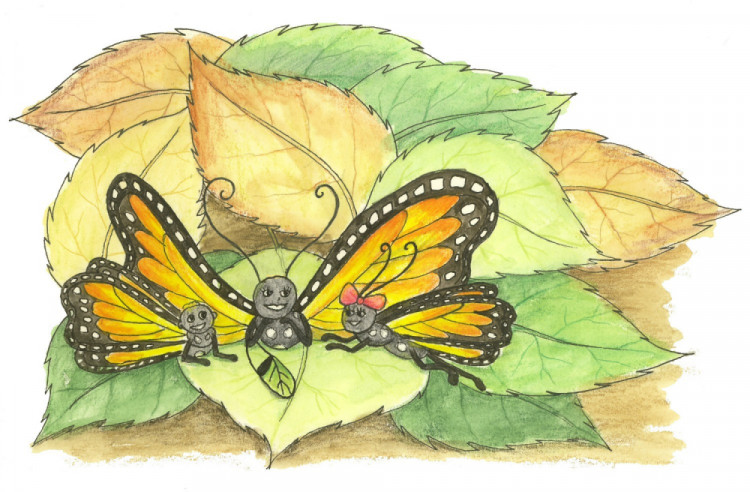